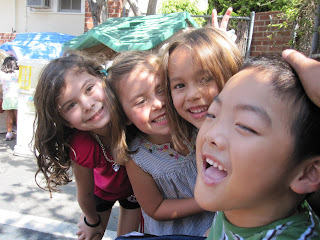 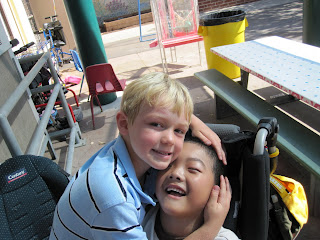 I stayed up last night to make an About Me picture booklet for Aidan. Since Aidan can’t speak for himself, I made the booklet for him, so that Ms. T could share it with the kids, if the occasion came up. I noticed the kids seem to ask each other if they had siblings or when was their birthday, what cartoons they watch, etc. I wanted the kids to understand that even though, Aidan looked different from them, he still likes and does a lot of things they like doing. So the booklet has pictures of our family (showing brother Connor) and it has pictures of Aidan’s favorite TV shows, what he does for fun (swimming, horseback riding, snow sledding), where he’s been for vacation, (skiing in Big Bear, surfing in Hawaii, zip lining in Costa Rica) and pictures of Aidan’s friends (typical friends and special friends). I made a point to include things that the kids could relate to by showing pictures of him doing things that they also like doing. I also included pictures of Aidan in his special equipment (the stander, the gain trainer), so that the kids will be a little familiar with it when they see him using the equipment.

Apparently, the About Me booklet went over really well. Ms. T said she ended up showing both classes the booklet. There is another Kindergarten class next door that shares the same playground and recess/snack time. Aidan’s class was just getting used to having him in the class and knew a little about him already, but the Room 2 kids were all very curious. Ms. T said nearly all 40 kids (both classes) had gathered around her and Aidan during recess as she took them through Aidan’s About Me booklet. Kids in Room 2 asked, “Why is he like that?” “What happened to him”? And now since Aidan’s classmates already knew, they were answering the questions for Aidan and Ms. T. Well done class… helping out your new classmate! As they went through the booklet, the girls were shouting out, “I like Dora too!” And others were saying, “I’ve been horseback riding,” “Wow! I wanna do the zip line!” The booklet did exactly what I wanted it to do...give the kids something to relate to with Aidan. Maybe they could think, “Hey, He’s different, but we like the same things” or maybe they’ll think, “Wow! He can do a lot of cool things!”

The bus transportation was still not resolved yet. Someone setup some ridiculous pick-up and drop-off time for him that made him be on the bus for about 2 ½ hours each way! What!! How could that be? The school is only 10 minutes from my house?! Were they driving him to Santa Barbara before they drop him off at school??!! That’s when I decided that I was gonna need a doctor’s note to justify limiting his bus ride to no more than 45 minutes each way. In my mind, that was within reason if you had to pickup a couple of kids on the route. They were gonna have to make sure the bus had a lift too. I had to talk to about 5 different people in Transportation and Special Ed Unit to get them to start the process of correcting the issue. Oh so they corrected the schedule in the system but it takes about 3-5 business days before it gets officially really in the system. What! Is this just typical of government agencies…INEFFICIENT and SLOW?! One person only does one specific thing and that person can't work outside her little box and talk to the other people in the chain to help you. Sometimes I think these budget cuts could be a good thing...at least in terms of administrative staff and inefficient, unproductive workers. But, I would never support budget cuts in the classroom. Fortunately, Aidan's class size has remained at 20 kids; unlike many other schools in the district that have had to increase to over 25 kids. But in general, I think the Palisades area schools have very active parent committees that do a lot of fundraising and donation drives which help support keeping class size down and hiring more teachers. Well, my plan was to call Transportation everyday and hound them until they could figure it out.

Since I’ve had to drop-off and pick-up Aidan and Ms. T, I see the kids all get ready for dismissal. I walked in one time and saw Aidan and Ms. T in the “kitchen” and several kids were surrounding them and they were playing. It was really great to see. The kids were putting the shopping basket on Aidan’s lap and putting play food in there for him. One kid put a banana in Aidan’s hand for him to “buy”. It was so cute! I was so happy to see that they were beginning to warm up to him. And it was only about the 5th day of school?!

Because I had blown a tire right outside the school, I had to wait for AAA. So I was waiting with Aidan and Ms. T in the play yard. Class just got dismissed and there was a parent volunteer meeting outside Room 2. As we were sitting around, this one boy comes over and says “Hi, Aidan” and proceeded to give him a big hug and caressed him dearly. Since I didn’t recognize the boy from Aidan’s class, I thought to myself, “Who are you?” Ms. T said that it was *Nathan from Room 2, they had met earlier. Wow, really? And he’s already hugging Aidan?? Cool! It was truly such a sweet, genuine, unconditional show of affection; it really touched me.

So I am really beginning to realize that it will be the children that are going to be the easy ones to win over. The kids are gonna be the ones to break down the barriers for their parents. Many parents that I’ve seen around seem to be afraid to come up to us and say anything, while their children have been the ones to come over and say Hi or Goodbye. This one girl from Room 2 saw us loading into the minivan and she and her friend popped their heads in to say, “Bye, Aidan!” Again, she wasn’t familiar to me so I was like “Who are you?” I asked her her name and she said she knew Aidan. And I could see her mom very cautiously standing back and wondering who that child in the wheelchair she was talking to was. And she didn’t even come over to introduce herself or meet us. I guess she was only going to talk to us if she really had to. Aidan and I have encountered her type many times.

It’s an interesting dynamic with having 2 teachers teach the same class. Each teacher has their own style and personality. I’ve gotten the download from Ms. T that, Mrs. B is the more warm and fuzzy one and Mrs. S is a little more straight and more of a disciplinarian. Ms. T had told me about a time one Aidan was put in his stander by the PT and several of the kids were really intrigued and interested and were marveling at the fact that he was standing. And rather than just making a quick acknowledgment about it Mrs. S quickly changed the subject and ordered the kids to stay focused and stay in their seats. Sometimes the kids would gather around Aidan and play with him and hold his hand or dance around him or something and she would discourage the kids, cautioning the kids to not hurt him. What?! Ms. T was rather annoyed with that and she wants Mrs. S to not discourage the kids to interact with Aidan. Aidan is not fragile. If he is to be fully-included in her class, she has got to let them play together with him. She should be more encouraging rather than discouraging. I advised Ms. T to tell these types of things to Miss L, the Inclusion Facilitator, so that she could appropriately advise the teachers how to better include Aidan in their class. It’s definitely going to be a learning process for these teachers. Because I am quite sure at this point, though they are thankful that Ms. T is there for Aidan to handle him, the teachers are not really giving Aidan any second thought.

“Is he contagious” – What?! What kind of stuff do your parents teach you?
Posted by Aidan's Mom at 11:20 PM