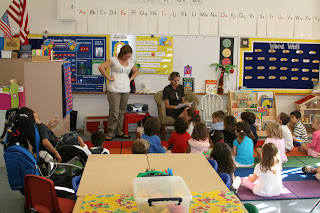 Since Ms. T was still not officially authorized yet to work with Aidan, I decided to accompany Aidan to school. As we got closer to the school this morning, it was apparent that parking was gonna be tough. The surrounding residential streets were packed already. With the parent meeting this morning it was extra crowded. Passed by the one handicap parking space they had in the lot and it was taken and blocked by about 3 other cars too. I found a space on a residential street up the hill from the school.

I pushed Aidan around to the front of the school where the main entry gate was open and encountered stairs…nope – can’t go that way. Tried to get in through the parking lot next to the handicap space…nope – gate was locked and cars were packed in too tight and couldn’t get him by. Went around the other way in the front and was able to get in through the side door through the auditorium. Mental note – gotta find out best accessible way to get Aidan in to school.

As we were going in to the classroom, I saw Miss L, the Inclusion Facilitator. I was impressed that she appeared at the school so early on this first day. We went in together and I told her that I was going to bring Aidan with me to the Parent Meeting. As Aidan embarks on this new journey of full-inclusion at a typical school, I feel compelled to show the school that I am 100% supporting my son in this very big endeavor – which means I will be volunteering for class activities, PTA, whatever it takes to show a united, supportive family. But, since Miss L was there today, I decided it’d be more important that we’d stay in the class to observe her guidance. There would be many more parent meetings I could attend. Miss L offered to be with Aidan while I attended the meeting, but I wasn’t quite comfortable to just leave him, so I passed on the meeting. I really like her and am very impressed with how she is good with the follow-thru.
Mrs. S talked to the class about the day and tried to get the kids to settle in. Mrs. B went around and gave stickers to the kids that she observed were sitting nicely and listening…sticker for you, sticker for you….Aidan and I were sitting at the back of the rug quietly. I was eagerly waiting to see if she would do her part of inclusion and give Aidan a sticker…but…No. No sticker for Aidan. Kind of disappointing.

Mrs. S said the class was going to take a tour of the school. She buddied up the kids for the walk around the school. She paired up Aidan with Steven*. Miss L tried to facilitate him getting familiar with Aidan and told Steven that he could hold Aidan’s hand, but Steven turned away and seemed to tear up. I told Steven that he could instead hold on to Aidan’s chair if he wanted, and he still turned away apparently afraid and started to cry. Steven’s reaction tore me up a bit. On one hand, I was a little taken aback that he could have such fear towards my gentle, sweet Aidan. On the other hand, I could sort of see how it was such a new experience for him to be this close to someone in a wheelchair that appears so different from him. So I let him be and we just walked side by side across the school. We got to the upper yard and the teacher stopped at the base of the steps while the line got in order. I tried to break the ice a little with some of the kids and asked another kid, Brian (one of the kids we met yesterday), to see if he wanted to help push Aidan up the ramp. Nope, he didn’t. But…another girl, volunteered, “I’ll help!” Wow…cool….I think that helped break the ice with the other kids, because most of them heard her volunteer. Because when we were coming back down the yard, towards the ramp, 2 girls volunteered to push Aidan down the ramp. Okay…nice, they're coming along…the kids may come around after all??

As we were walking I could hear Steven telling the other kids, “Look he doesn’t move at all…isn’t that weird?” That kind of crushed me. I know that’s gonna happen…but, I guess I have to look at it as needing to educate them about Aidan. Another kid was asking me why Aidan was the way he was. I tried to explain to her that when he was a baby he got really really sick and he didn’t learn to walk and talk. And she made a gasp, “oh no!”.

We got back to the classroom and had snack outside. A few other kids were curious and asked me more questions. Some other kids stared.

Afterwards, we went back inside the classroom, and Miss L came back. I mentioned to her that it would be better to do a little orientation thing for the kids about Aidan sooner rather than later because a lot of kids were already asking a lot questions and were very curious. She ok’d it with the teacher to do a quick Similarities & Differences talk to the kids about Aidan. While she was doing this, the school nurse and supervisor caught up with me. I could hear the kids ask Miss L a lot of questions. When she told them that he will be communicating with a talking computer, I heard one boy, say, “Cool, I want a talking computer!”. They asked about how he eats, and I explained to them about his feeding tube and his feeding pump.

The Assistant Principal and the district access lady came by to catch up with us too. As I was talking with them, the teacher was doing Simon Says with the kids and I could see Aidan smiling and laughing and enjoying watching them jump around. The AP told me that Ms. T should be good to go. Her paperwork should be cleared up and she could accompany Aidan tomorrow. Great news! I was surprised and pleased they resolved it promptly! Yeah!

The day continued with a craft activity and some free-play. After I completed the craft with Aidan, we went into the book center and read some books. One girl kept watching us on and off and would periodically ask me a question about Aidan. How does he eat? She wanted to see his feeding-tube. Was he born like that? For simplicity sake, I said yes. She asked why did god make him like that? Boy, if she only knew how many times I’ve asked that myself! I answered her by saying God makes people in a lot of different ways. Everyone is different.

The physical therapist also came by too. She checked in on us and told us she was going to check the schedule with the teacher so that she could figure out when to schedule in her PT time with Aidan. Geesh…I think we met just about all the people in the chain of Aidan’s inclusion…all on Day 1?! Pretty good start so far!
Posted by Aidan's Mom at 9:34 PM