A trip to The Magic Kingdom

We took the boys to Disneyland to celebrate Connor's 4th birthday. It was their first time. We made it a 2 day venture with a night's stay at the Disneyland Hotel, so that we would get a chance to see the night time activities too, and possibly visit California Adventure the next day. I don't even remember the last time I was there! I forgot what a huge fortune it was to go there! Can you believe that for a family of 4, 2-day park hopper tickets costs nearly $600....just for admission! And...most of that time you spend standing in line and spending money on subpar park food! But...we do it all for the kids, right? Connor was beside himself with excitement.
When I had the boys pose by this Mickey statue for a photo, two other girls were waiting along side for the next photo opp. I told Connor to say, "Hi" to the girls and he introduced himself; "Hi, My name is Connor, This is my best friend Aidan." Inside, I thought to myself...Aawwww, that is so sweet! As much as Connor so often infuriates me with his strong-willed, rambunctious, defiant toddler behavior, I can easily forget those misbehaviors when he has moments like that. All things considered, Connor is actually very sweet and considerate of Aidan. Whenever we walk around anywhere, Connor insists on holding Aidan's hand, thus we have to push the stroller and wheelchair side-by-side so he can hold Aidan's hand, which sometimes makes it difficult to get through a crowd of people. But...we don't want to discourage Connor's affection for his brother. I am often amazed at Connor's constant consideration and genuine affection for his older disabled brother. It may have started with our parenting at home. When Connor is excited about something and shows me something, I tell him to show Aidan too. When Aidan lets his head fall forward and he needs help putting it back, I tell Connor to help Aidan put his head back. When Aidan is coughing and gags and looks like he might throw up, I tell Connor to help and grab the red throw-up bowl. Connor willingly and happily helps. He has even started to whisper secrets into Aidan's ear and even used Aidan to support his arguments with me! Connor will say, "But, Aidan wants to watch Thomas!" when in fact, Aidan hates Thomas. Like most parents, I constantly struggle to raise my children to be well-behaved and considerate of others, and its those special moments when he displays that kind of thoughtfulness, that I feel just a little bit of assurance that maybe I am doing something right...
I often ponder at what point Connor will become conscious that his brother is different. Right now at home, I don't believe that he is truly conscious of it yet. Since he has always known Aidan to be the way he is, it's nothing out of the ordinary to him. Though I am sure that when Aidan and Connor attend the same school and Connor's friends meet Aidan, they will probably start to ask him, "Why doesn't your brother walk or talk?" I'm not sure how Connor will react but, knowing Connor, I think he will just shrug it off and say, "I don't know, but he's my brother, that's the way he is," and he'll just go on with his day. 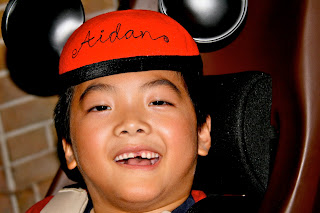 Here's Aidan in his mouse ears hat, displaying his recently mature smile with one less top front tooth...this is the first tooth to come out with maturity. Somehow with less teeth...I think he looks a little more mature...funny, huh? 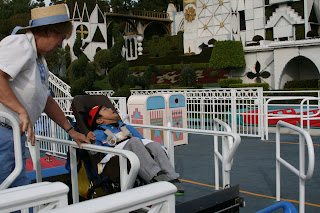 Here's Aidan getting on the special handicap accessible boat on the It's A Small World ride. It was one of just a handful of attractions that he was able to enjoy. The other attraction he was able to ride was Jungle Safari. These two attractions had special handicap accessible boats that the wheelchairs can be pushed on to. We first tried to ride on some ride at Toontown and got turned away right at the loading point. I had even offered to pull off the special seater and strap it in the ride, but they turned us away saying it would be unsafe. At first I was annoyed and felt discriminated against. But...when Kevin and Connor came out of the ride and said that the ride was scary and a little jerky...it was probably wiser that we did not ride it. It surely would have freaked out Aidan. He's not too crazy about the larger than life characters too, e.g., Mickey and Minnie. He'll completely tense up and start tremoring when he sees the characters come his way. I basically have to shoo the characters away from Aidan. 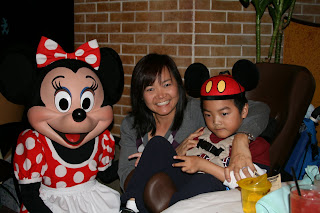 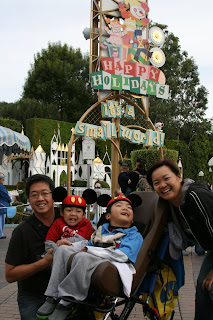 I had emailed Aidan's teachers and therapists that he was going to be absent the 2 days for a trip to Disneyland. So they all knew about his trip, and in case the kids were going to ask where he was for the 2 days, I wanted to give Aidan something to share with the kids when he returned to class. So when we got back, I printed out a few photos for Aidan to take to school and told Ms. T about them so that she could share with the kids if they asked. I also recorded a brief message on his voice output device spoken in first person as if Aidan were saying it, saying that he went to Disneyland for the first time to celebrate his brother's birthday and that he had a great time. Ms. T and Aidan got back from school that day and she said the kids loved the pictures and the message. She said the teacher, Mrs. B, gave them the opportunity to share the pictures and the voice message to the entire class. I thought that was very cool of the teacher. In the back of my mind, I always empathize for Aidan because he cannot speak for himself, thus I try to fill-in-the-blanks for him whenever I can. Especially, in this case with the other children in his class, I want them to accept him and see that he is a cool kid and does cool things. I have high hopes that one day...when his communication is figured out...I am sure he will have lots and lots of things to express.
Posted by Aidan's Mom at 8:45 PM No comments: