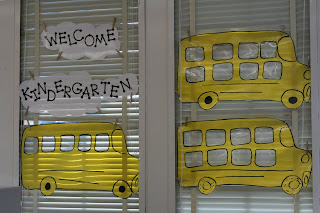 September 8, 2009
Today was Aidan's elementary school’s Kindergarten orientation. It was to be from 11am to 12pm. A letter I received last week said they were going to post the classroom assignments at 10:30am.
Aidan and I arrived right at about 10:30am. I wanted to get there early to meet the teachers before everyone else got there and maneuver him around a little bit to get acquainted. Ms. T, Aidan’s health care assistant, met up with us at the school. Aidan has a district-provided health care assistant to take care of his g-tube feedings. As well, there was no way that I would let him be a part of a "typical" class without a full-time 1:1 aide.
We saw her in the hallway before 11am. I am already very impressed with how motivated, enthusiastic and diligent Ms. T seems to be. Besides spending her own time to come over to our house to get acquainted with Aidan last week, she also volunteered to meet us at the orientation to meet the teachers and get familiar with the surroundings. I am also very pleased that Aidan seemed to warm up to her pretty well. Despite a short time with her in Teacher K’s preschool class last summer, Aidan seemed to remember her.
According to the classroom assignments list, Aidan will be in Room 1, Mrs. S and Mrs. B. These were also the 2 ladies we met when we dropped by the school last week. So far so good, they both gave us smiles and a warm greeting last week…today as well. Mrs. S and Mrs. B co-teach the class, splitting the weekdays. Outside of Room 1, I saw that Aidan’s new gait trainer was already there…good sign – they got his equipment. I pushed Aidan in to the Kindergartener’s play yard and saw they had his stander there as well. Every student had a cubby already labeled with their name. Aidan also had his own labeled cubby. All the signs were good that they were ready for him, and everyone was still pleasant and friendly. I continue to hold a deep rooted fear that this full-inclusion thing is not going to work out well. I fear that the teachers will be unhappy and feel he’ll be a burden. But…so far so good. But…school is just starting tomorrow. We’ll see…
True to what I have come to expect of some Palisadians (demanding, pushy, pretty people with money), while in the school’s main office, I observed one mom holding her sobbing kindergartener on her hip, reeming the Principal for not assigning her daughter to the room she had requested so that her daughter could be with her friends. The Principal was quick to give her the brush-off stating that they don’t take requests, and that her daughter would adapt. That mom was telling him how peculiar it was that her two friends who also put in requests got what they wanted but she didn’t. Come on, Lady! This is a public elementary school, not a private countryclub? Do you really have to carry your very able-bodied daughter on your hip? Out of necessity I've always had to lift and carry Aidan and maybe for the rest of my life I will need to do that. So I do not take these things for granted.
Aidan and I were patiently waiting along the side to introduce ourselves to The Principal while this exchange was going on. That mom left the office in a huff, and The Principal turned to us, apologized and we had introductions. He seemed nice and friendly and happy to see us. I could tell it was a crazy day for him…probably more neurotic parents he’d have to deal with.

Ms. T, Aidan and I, queued up to get into Room 1 and situated ourselves. I looked around and noticed all the pretty blonde-haired, blue-eyed kids, and their camera-clutching, ecstatic, proud parents. I felt a little inadequate because I didn’t bring my camera! But, I didn’t think this orientation was for the kids too…and it seemed many Moms and Dads were there. As I looked around the classroom, I noted that they had his Special Tomato seater (for the floor activities), and also had his Table-Mate (the inexpensive, adjustable non-special needs table that I referred the physical therapist to - for about $30 it was a complete steal compared to similar special needs equipment). I also noticed that besides Aidan and maybe one or two others kids, everyone else was WASP. But… it’s the Palisades, goes with the neighborhood.
One mom and child introduced themselves to us…daughter – Cassandra*. They also live in The Highlands. Mom said she had seen us at The Summit Club before. Pretty cool coincidence! We're pretty easy to identify because we're probably the only family with a child in a wheelchair going to our clubhouse pool.
We sat in the back and Mrs. S explained a few particulars about the class and got through some administrative stuff. She then called for all the students to gather around her on the rug and she was gonna read a story. Ms. T slowly pushed Aidan closer so that they could be with the other kids and hear the story. I was very impressed that she did that without my prompting!
When things concluded, Ms. T and I checked out the restroom for Aidan’s changing needs. As we were doing this, another parent and child introduced themselves to us. Son – Brian*. It was very nice of them to make a point of introducing themselves to us. Dad was real nice and said Brian would be a good helper. Very cool, huh? We also met another family, whose daughter's name was Jill*. And…turns out that the mom that made a big stink about her daughter not being with her friends…is in Aidan’s class! Daughter – Ava*.
Mrs. B took us to what would be Aidan’s restroom, as it had a table for changing and also a toilet…for Ms. T to use. It was the “Faculty Men’s Restroom”, but apparently there were less than a handful of men that worked there. It was a little far from the class, but should work out ok.

Afterwards, The Principal introduced us to the Assistant Principal. With all the district budget cuts, she was only gonna be at Aidan's Elementary School part-time, splitting her time at another school. Ms. T thought she was pretty good. The Assistant Principal seemed to be on top of trying to resolve the issue of having Ms. T's transfer be official so that she could be Aidan’s aide. Ms. T seemed really worried about having all the paperwork resolved so that she could start with Aidan tomorrow. If it wasn’t resolved, she was gonna have to report to her old school until it would be. I like that she is so gung-ho about working with Aidan. She’s got good follow-up and follow-through. I think she’ll work out great for Aidan.

My To Do List: 1) follow-up with Special Ed Nursing Supervisor to resolve the administrative issue of getting Ms. T to be with Aidan; 2) follow-up with Transportation about the bus. The Principal said, since we live in The Highlands, Aidan may be the only one on the bus…Fine with me! A direct, express ride! That's what I was secretly hoping for!

I cross my fingers for a good school year. New experience for everyone all around…
Aidan did well today…no noisy breathing, no vomiting, not a lot of posturing and stiffness. All good signs…
Posted by Aidan's Mom at 6:49 PM