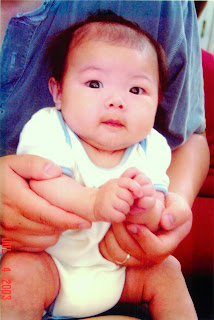 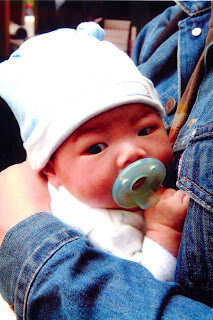 I went back to work after about 4 months' maternity leave and placed Aidan in a daycare right across the street from my office. Given all that happened with Aidan in his first 3 weeks of life, I was constantly worried about him. I would run over to the daycare during my lunch and see how he was. I worked for a large corporation in a demanding brand management job so returning to work was tough. I couldn't really focus. Aidan started therapy through the Regional Center at about 4 months old. The Regional Center is a government-funded organization that helps infants at-risk for developmental delays by providing various therapies. But therapy for an infant is very much about using rattles and puppets, helping them track objects and locate sounds. However, we weren't really certain Aidan was delayed in his development, especially since he was our first child, we did not have any personal point of reference. We were hoping, wishing, and praying that he might have escaped his early post-birth trauma unscathed. It really wasn't until our pediatrician (different from the original birth) pointed out some of Aidan's abnormal eye movements. For Aidan's first several months we did notice that occasionally his eyes would seem to cross and they would sometimes look down uncontrollably. We thought the eye-crossing was relatively normal for babies, which the pediatrician did confirm. However, the eyes "sun-downing" was a little unusual. When Aidan was about 5 months old, she referred us to see a pediatric neuro-ophthalmologist. This neuro-ophthalmologist had a brain MRI done on Aidan and that was when our worst fears became reality. Unfortunately, Aidan did not escape the neonatal hyperbilirubinemia (severe jaundice) unharmed. The MRI showed that he sustained a brain injury caused by the bilirubin crossing the blood brain barrier and affected the basal ganglia, the part of the brain that controls motor function - all bodily movements. This explained the "sun-downing" eyes. The ophthalmologist was the first to officially utter the words "kernicterus" and "cerebral palsy" to us as a diagnosis. Kernicterus describes the brain injury, and cerebral palsy is a very broad term describing his movement disorder. I was at work while I had this telephone conversation with the ophthalmologist about Aidan's MRI findings. It was an extremely tough conversation for me. I had just learned that my new baby had sustained permanent brain damage that would likely lead to a lifetime of challenges for him. A chill came over me like never before.

Through Aidan's first 18 months, we saw nearly every type of specialist out there -- Neurology, Gastroenterology, Neuro-Ophthalmalogy, Endocrinology, Medical Genetics, and a Developmental Pediatrician. As a baby, Aidan had difficulty gaining weight. The pediatrician was perplexed as we tried different formulae, and did a series of hormone tests, and genetics tests. It wasn't until much later that we concluded that his lack of weight gain had to be related to the amount of extra energy his overactive muscles expended for him. Just about every specialist we saw, after hearing our diagnosis and our story they would say, "Kernicterus, huh? That's rather rare nowadays." Yes, it's rare because it is completely preventable (at least in our case, it definitely was) - given proper medical care! And because kernicterus cases are relatively rare, I've found that doctors are unsure of how to help us, since Aidan's brain injury is not like the more common cerebral palsy case caused by oxygen deprivation, for example. I've seeked out the experts in Aidan's condition and had them examine Aidan and learned a few things. In terms of positives vs. negatives, here's how Aidan's condition breaksdown: The Positives - 1) his brain injury is static, it's non-progressive so what's done is done and it won't get worse; 2) his hearing is normal and was unharmed - this, I am thankful for because hearing loss is often one of the more common issues with kernicterus; 3) his cognition is in tact and he does not have seizures. The Negatives - 1) he has severe dystonia, this is irregular, very tight muscle tone and abnormal posturing - some doctors and therapists have even told me that Aidan is the stiffest kid they have seen; 2) he is completely non-verbal, while his receptive language is high, his expressive language is extremely limited (he whines and groans when he doesn't like something and smiles for things he wants) - this is a huge challenge for us caregivers to figure out his needs and wants; 3) because of these issues, he is unable to do anything independently, thus needs constant, round-the-clock care. Once the reality of Aidan's diagnosis set in, we had lots of doctor's and therapy appointments to make. When Aidan was about 9 months old, we decided that I would quit my job to provide Aidan the best care possible. Thus, I chose to trade in my MBA degree and instead use my MOM degree to the full extent possible, and since then, I have never looked back.

Now all that being said, we've tried all kinds of treatments and therapies. Aidan started doing therapies since he was 4 months old. Over the years, we have tried traditional therapies and alternative therapies -- accupressure, and Chinese herbal therapy, hyperbaric oxygen, Feldenkreis movement therapy, The Anat Baniel Method (another movement therapy), Suit Therapy, even a therapy called ABR (Advanced Biomechanical Rehabilitation) for which we traveled to Montreal, Canada. That ABR therapy turned out to be quite hokey. It had to do with restoring the volume mass back into your body by applying towels on the body and applying pressure in a "quasi-static movement." After seeing it in person, it's no wonder that the videos that explained the therapy did not show the actual therapy in action. It only showcased patients' testimonials and their before and after "results." And yet, there are still so many other types of therapies out there we have not yet tried. However, I now consider them with much more caution and suspicion. Quite honestly, Aidan will likely need therapy for the rest of his life. And while progress continues to be small, we've learned to appreciate and celebrate the littlest milestones. We have high hopes in the advancement of scientific research and medical technology that within Aidan's lifetime, something will breakthrough and be the boost that he needs to take leaps forward. I think that something may be stem cell therapy, but right now it's still a ways away from being the solution...but, I believe that solution will come within his lifetime.

Given all that Aidan has been through, he is the most cooperative, resilient and spirited kid I know. He never complains about getting worked out during physical therapy, and he always bounces back from bouts with illnesses with a big cheery smile. I used to dream that my child would win Wimbledon, or graduate from an Ivy League college, and become a doctor or lawyer. But, now my dreams are different...much simpler. I dream that Aidan will one day be able to clearly utter the word, that I so often here Connor say - "Mommy." I dream that Aidan will one day gain the strength and ability to stand up tall and wrap his arms around me and give me a great big bear hug. But for now, I am content with the wonderful kid that he is and every time I look into his eyes and see that beaming smile on his face, I feel blessed.
Posted by Aidan's Mom at 1:14 AM 1 comment: 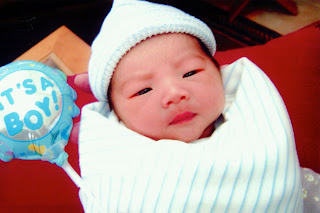 Some people that know me, have come to know me as Aidan's mom. The cheerful, hands-on, perpetually-late-to-appointments, multi-tasking mom to the quiet boy in a wheelchair. What most people don't know, is how and what happened to Aidan. Though a little painful to recount, I feel it's worthwhile to share here because I think something can be learned from our experience. It may enlighten and help you understand who we are as people and why we are the way we are.
Resilience. Perseverance. Joyfulness. HOPE.