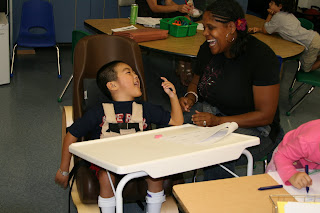 Ms. T arrived at the house promptly at 8:00am. The district transportation people were still working on getting Aidan through the system and routed for the bus, so for at least this week, I was going to have to take Aidan and Ms. T to school. It works out for me that Connor’s Preschool start got delayed to next week. I really wanted to accompany Aidan this first week of school.

We arrived at the school and parked by the lower yard. The Principal said the lower yard gate would be unlocked and we could go up the ramp from there. All the arriving parents were saying their goodbyes to their kids as they settled into their classroom. Since Aidan was still getting his tube-feeding, rather than transfer him to the floor sitter, I thought it would be best to just leave him in his wheelchair until the feeding was done. I told Ms. T to go ahead and check in with the school office and do whatever she needed to do with them. I would stay with Aidan. We joined the kids at the back of the rug for the morning greeting. Mrs. S greeted the class, did the calendar (“Today is Tuesday…”) and sang the “Days of the Week” song. Aidan loves that song and knows it well from Teacher K’s class. He was smiling. She started the kids off with a song to get them comfortable. It was the Tooty Tot song. I hadn’t heard of it, but it was a cute one. She had the kids stand up and do all the gestures and movements together. A tooty tot a tooty tot a tooty too too…thumbs up… The kids were following along well. Aidan was enjoying the interactiveness. Mrs. S then proceeded to take attendance and got clear on last name pronunciations. “Aidan, is it Lu-weng?” I corrected her, “Le-Ung”.

She told everyone to sit in a big circle on the rug. Ms. T tried to direct one kid that she could sit next to Aidan and the girl did not want to. Then Ms. T said she could sit next to her and she did not want to, so the girl went to sit next to another girl. In an effort to get everyone to remember each other’s names, they passed around a turtle toy and when each person got the turtle they had to try to name everyone in the circle. Not all the kids knew each other’s names yet…but…it appeared that all the kids knew Aidan’s name!

They read a story then broke early for snack and recess. We found that to be a good time to take Aidan for a changing. We walked across the way to Aidan’s designated restroom/changing area. There was a nice big padded changing table there to take care of his diaper changes. He had already soaked through to his clothes and even through the chair pad! Luckily, I always supply his wheelchair bag with an extra set of clothes (for diaper leaks and throw-ups). We got him changed up and went back to the play yard. I advised Ms. T that the kids snack/recess time would be a good time for her to give Aidan some juice via g-tube. While we were doing this, the same girl, Brittany*, that asked me about Aidan and why God made him that way asked me again. Even though I’m God-ambivalent, I told her that God made everyone different, and that nobody was the same. I (an Asian) looked different from her (a Caucasian). And Ms. T (a Black woman) looked different from me. She accepted the response then, changed the subject…”wanna see me hoola hoop?” Ah…a 5 yr old’s attention span…gotta keep up!
We watched her and some other girls hoola hoop…Aidan was entertained.

Ms. T was trying to recall some of the kids names. She pointed out one girl to me that in the circle on the rug, gave her the cold shoulder, don’t touch me look. And Ms. T said, “she’s got one of those parents”. She told me she’s encountered that before at other schools she’s worked at. Yup…in the Palisades, that’s how it is. Aidan is probably just one of a handful of minority kids in the entire school. In fact, he is a double minority – Asian and disabled. The entire school will know him!

After recess they settled back in and got dispersed into their centers. Ms. T did the book activity, hand-over-hand with Aidan. She got right into it and worked with him along side the other kids. I sat out of the way just observing. She did great, constantly talking him through the activity and guiding his hand to hold the crayons.

Afterwards all the kids got back on the rug for closing, rug assignments and a final story. It appeared to me that she assigned the potential trouble-making, rowdy kids to sit in the front row, right next to the teacher. The final story was Chicka Chicka Boom Boom. Aidan likes that story. But..the teacher didn’t read it, instead the song played on the CD while she turned the pages in the book.

The Principal and AP came and checked in on us again. I am so impressed! They’ve been very attentive and accommodating! Part of me wonders whether they are really trying to make this inclusion thing work because they want it to or if it’s because they don’t want to get in trouble for not doing what they are supposed to be doing?

Later, the nurse supervisor came in to check on us. He wanted to also check out the suction machine and make sure she knew how to work it if Aidan ever needed it. I told Ms. T I never use it at home on Aidan, but got the protocol in place more so that I could ensure that a health care person would be assigned to him at all times. Apparently, if he only had the g-tube feeding protocol, then the district just might send a floater person to pop in for feeding time and then leave. This was not acceptable to me. It was a mandatory for me to have someone with Aidan 1:1 at all times.

Got through Day 2. So far everyone is still warming up to each other. The teachers still seem a little unsure of how to include Aidan. Mrs. S has come over to greet and speak to Aidan…but, it doesn’t appear to me that she’s really speaking to him with sincere interest. That could just be her style….she may be like that with all the kids. I’m wondering if Mrs. B will be better? She will be here Monday, Tuesday next week.

We got home and Aidan threw up. Ugh! At least it wasn’t at school. I’m trying to educate Ms. T about all of Aidan’s little idiosyncracies – what to deal with: the noisy breathing and wheezing – how to reduce it by adjusting his positioning; the hyper extension of the body – how to break it up and get him to relax; understanding his need-to-vomit body language cues. He’s got a lot of little idiosyncracies for her to get to know and understand. She seems to be taking it all in stride and conscientiously making mental notes. I really like her and think she’ll be a great partner for Aidan.

I took Aidan to his chiropractor appointment. Dr. C seems pretty good. He maneuvers his body, unwinds it, presses on it…C1, C2…Aidan laughs when he calls out those neck bones. I believe Dr. C may have been the one that loosened up Aidan’s left deltoid – it was rotating back really tightly. And after Dr. C worked on him last week, it seems much better! Sometimes his arms get so stiff and twisted, I think that it has got to be hurting him! Imagine a huge, prolonged muscle cramp that won’t go away! Ouch!!

But…got home from the chiro and Aidan and started a feeding and he was throwing it up again. I told Becky, our nanny, to resume giving him the Pepcid and also give him some Motrin tonight. I had to slow the milk feed way down. After he was given the medications, he seemed much better. Ugh! I feel so miserable when he is feeling cruddy and vomity like that! Why can’t the doctors figure it out and fix it! I decided it was best to include a towel and a vomit bowl in his wheelchair supply pack for school. I don’t want to scare the kids by seeing him vomit…hopefully they won’t have to see it…but…this is how life is for us.
Posted by Aidan's Mom at 10:30 PM