The Cruise stops in Turkey and Greece, "Special" Vacation, 4

Today we docked at Kusadasi, Turkey.
Connor woke up not feeling well.  He had a bit of vomiting and stomach pains.  We all still went out to the ancient city of Ephesus by a private van and tour guide which Kevin arranged.  This works well for us, as we can determine our own schedule and order of sites to see and also helps in accommodating the extra time to get Aidan on and off.  Monica volunteered to backpack Connor since he wasn't feeling well.  And Kevin backpacked Aidan thru the walk of the ancient ruins. 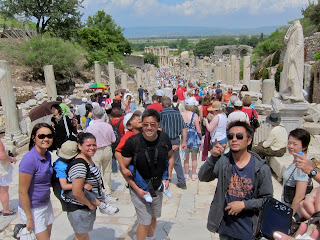 The ancient city of Ephesus, is mind-blowing.  It is an entire city of ancient ruins thousands years old, so well-preserved.  To think that man could have built such elaborate and sophisticated structures back then is unfathomable.  We also went to the religious shrine of The Virgin Mary's House, which is believed to be where Mary went to live out her days after the Resurrection of Christ.  There was a prayer wall there where people would write prayers on napkins or pieces of paper and tied them onto the wall.  I made my standard prayer and wish for my Aidan, its always the same wish that I make when I go to temples or churches, or blowout birthday candles.  Its the wish that my Aidan will walk, talk and be independent.  I figure that this could be the holiest, and closest point to the Higher Power, it may have the best chance of being granted. 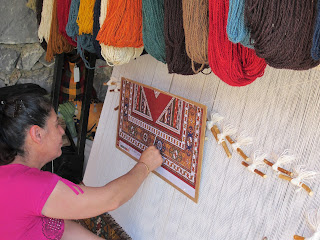 Our guide took us to a lunch place co-op where we had traditional Turkish food, lots of grilled meats and side sauces.  At the same place they also demonstrated to us how they get silk from the silk worms and make them into different color threads for making the famous Turkish rugs.  We saw how the ladies produce these hand-made rugs by labor-intensive, time-consuming meticulous work.  It takes about 15 months to make one rug, so its no wonder that Turkish rugs have the high quality and high price reputation (e.g., $6-12,000 for an 8x10ft).  Kevin and I almost got lured into buying a rug.  We did considerate it, but luckily we did not do it, because the prices turned out to be inflated compared to the bazaar prices.
We also went thru the Turkish grand bazaar, a shoppers headquarters.   Personally, I love to shop anywhere and anytime, but I did not enjoy shopping at the Turkish bazaar as there was too much pressure to buy. 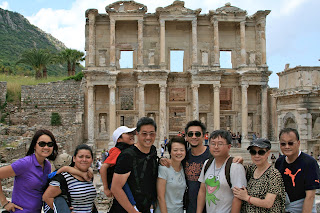 May 16, 2012
Today we docked at Rhodes, Greece.
It was a leisure day of exploring on our own in Rhodes.  It was an ancient walled-in city.  The wall around the city still exists and there is a castle which was called the Palace of the Knights.  Luckily Connor by now was back to himself.  We all walked around the city which had shop after shop; we walked around in the castle then continued on walking the shops and restaurants.  We settled in at a street café for lunch.  Many people see us and look and stare at Aidan.  I sometimes wonder what they are saying to each other when they are staring, pointing and talking to each other.  My guess is, most of those people are wondering what's wrong with him and why he's out with us, so I just try to ignore them. 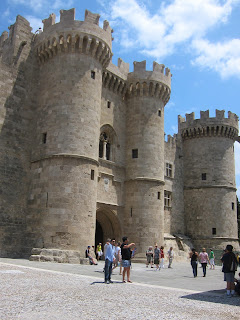 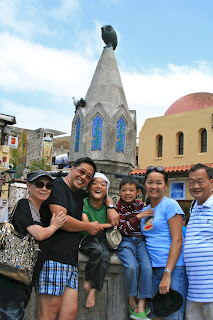 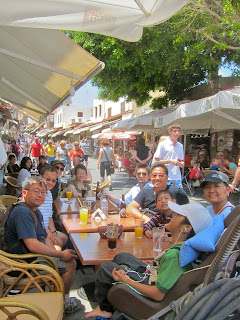 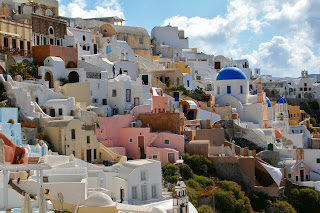 Santorini is the picturesque scene that one thinks of when they think of Greece.  It’s got the beautiful cliffside homes and gorgeous blue waters.  We took a bus ride from the harbor to the town.  It would seem to me that this would be a difficult place to get around.  Its definitely not wheelchair accessible. 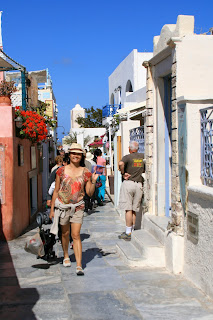 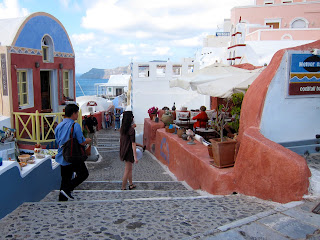 Its got cobble stones, and paver stone that makes for a very bumpy ride.  And steps randomly all over because the town is built into the hillside and its very uneven.  Nevertheless we still got Aidan around.  Though as we anticipated much of this for most of Europe, I had bought a soft backpack carrier to transport Aidan around.   Kevin would backpack him and I carried the stroller.  This allowed us to put Aidan down in the stroller when we got to flat even land.  Santorini was incredibly gorgeous and even more beautiful depicted in the movies.  I would love to go back there one day and spend more time, but it definitely seems more of an adult getaway kind of place. 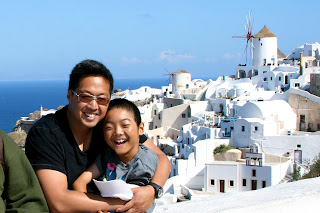 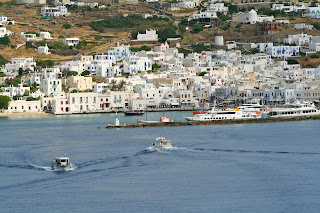 It was cloudy, cold and rainy.  The port was small so our cruiseship had to dock further out and we had to take a tender boat to get to the port.  Later in the afternoon it stopped raining and we got off the cruiseship and walked around Mykonos.  Because it was rather chilly and still spotty rain, Aidan stayed on the ship with Monica.  Luckily he did because it was really not very wheelchair accessible strolling around Mykonos.  It was gravely and had large paver stones and would have been a very bumpy stroll, and also random stairs here and there.  All the better because there wasn’t really much to see there for us anyway, just shops and boutiques and cafes.  I was amazed at all the small cars driving thru the narrowly tight alleys and roads with just inches to spare from scraping the walls. Apparently, Mykonos is known more for its nightlife. 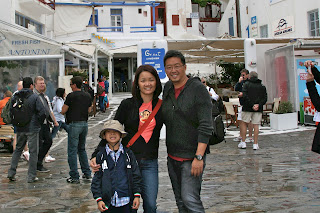 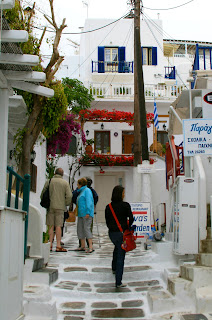