The Cruise goes to Athens, Greece- Our "Special" Europe Vacation, 3

May 13, 2012
Something I ate yesterday did not settle well with me,  I think it was a short bout of food poisoning.  I woke up in the middle of the night feeling quesy and thought it was me feeling motion sickness from the cruiseship.  But I had to run to the toilet and needless to say, I had waste coming out of me from both ends.  It was ugly!  Kevin seemed to have something bugging him too as he said he was fighting a fever and couldn’t regulate his body temperature.  He was thinking it was the canoli he ate after lunch in Taormina.  He and I shared it a bit.  It must have been it because, luckily, the rest of the family did not get ill, because we all ate nearly the same food in the same dining hall for dinner.
We both just about laid up in bed most of the day.  Fortunately, with Monica around, she was able to take care of the boys.  She’s been tremendously helpful with the boys.  Being a mom herself, Monica, seems to enjoy the interaction of the brothers and doesn’t mind caring for both of them.
Fortunately, our day of illness was a day at sea for us.  So we didn’t miss any shore excursions.  It was a chill on the ship day, and we sure needed it.  In the evening we got dressed up for the first formal night of the cruise.  Cruises have these formal nights where all guests can dress up and take formal studio-like pictures before or after dinner.  You then have the opportunity to buy the photos at an inflated price.  The photos can be nice momentos for the guests and they also turn out to be pretty good money makers for the cruiseships. 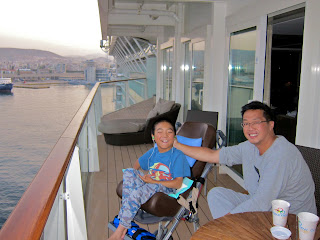 May 14, 2012
Today we docked at Athens, Greece.
We saw the old Olympic stadium which was made entirely out of marble.  It's roped off and people are not allowed to walk into the stadium but can take pictures from the outside.  We also went to the Acropolis and it was such an amazing site.  Lucky for us, they had a special lift (elevator) on the side of the mountain and Aidan and I rode up that to get to the top of the Acropolis.  The rest of the family

walked up the stairs to the top.  It was very cool that they added something like that.  Once we got to the top though, Kevin backpack-carried Aidan because the ground was gravel and quite uneven.  But, I thought it must have been a nice change for Aidan to have the same view we always have at our eye level.  He seemed to enjoy himself.  After taking many pictures at the top, Aidan and I rode back down the lift again while the rest of the family took the stairs down.

We went to lunch in town and Aidan fell asleep.  He got in a good long nap during our lunch.  He’s had difficulty adjusting to the time difference and I think all the activity moving around and seeing things really tires him out.
We also walked around town.  Our guide took us to the top of a hill and we had a beautiful 360 view of Athens.  The city is so tremendously dense.  Building after building all around, but no skyscrapers.