"What's Wrong with Him?" 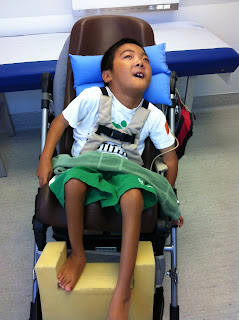 "What's wrong with him?" is a question I often get asked from other children. Since Aidan is my first and only special needs child, I am still feeling my way thru the parenting part of it. It's like on-the-job training; learn as you go. One might think that I would have canned answers to basic questions like this. But honestly, I don't. It often depends on who is asking, and how old they are. Are they asking because they really want to know or just want an explanation of why Aidan looks different?  For children, I've concluded that the easiest most comprehensible response is, "Well, he just can't use his muscles very well."  If there is a further question, "Why, what happened?" I usually say that when he was a baby he got very very sick and just couldn't learn how to walk and talk.  I don't think most children could comprehend the idea of severe jaundice causing a brain injury resulting in Kernicterus.  Heck, for that matter a lot of adults don't even know that. What you see in Aidan is that he has cerebral palsy. Cerebral palsy, as defined by Wikipedia is, "an umbrella term encompassing a group of non-progressive, non-contagious motor conditions that cause physical disability in human development, chiefly in the areas of bodily movement." This is a good definition. Generally, when you say CP, people understand that its a physical muscular impairment.  And, in many cases cerebral palsy does not mean cognitive impairment, which is the case for Aidan, whose cognition is in tact.

I often struggle with how much I should tell someone about Aidan, especially someone that I don't know. Sometimes I feel like if I don't say anything or explain his condition, then I think that I might appear ashamed or bitter, which I absolutely am not. On the other hand, I feel like if I take the chance to explain, it's my chance to rather educate and enlighten the person.  It's sort of my chance to let the person know that Aidan is not anything to be afraid of, and while he looks different and cannot talk, he understands when being spoken to and likes many of the things that typical kids like. Very early on, a wise pediatrician once told me that I was going to be Aidan's biggest advocate in his life. I've come to accept that role wholeheartedly and truly try to live it outward on a daily basis. That is one of the reasons why I write this blog.

Most of the time, I am sure that well-meaning strangers do not intend to be offensive with their remarks.  But, sometimes I can't help but get annoyed or let an innocent comment get under my skin.  Once, when Aidan and I were waiting for a doctor's appointment, an elderly couple had observed Aidan and I waiting.  And I heard the elderly woman comment to her husband how such a shame it was that Aidan was the way he was because he was so handsome; kind of implying that his good looks were being wasted on him because he was disabled.  I wanted to reach over and slap that old woman across the face!  Not only did it offend me but, it just deeply hurt me too.  But, I can't say that I would feel good about decking an old lady.  Needless to say, I did not say anything to that lady, since she wasn't talking directly to me.  But, I know that those types of comments, remarks and probably worse incidences will continue to happen in the future.  I just think that there is an appropriate time and place to educate and be constructive.  It'll continue to be a learn-as-you-go thing.