I have officially become one of those moms that I mocked earlier at the start of this blog. I drive a luxury SUV and drive my kids to school wearing my cute tennis clothes. My husband is not in entertainment but, he is a lawyer who works long hours and even though I don't have a paying job outside the home, I have a nanny-housekeeper. After 5 1/2 years of living here, and now that I look and live the part...I finally feel like...we belong! No longer do I feel like an outsider in my own community. 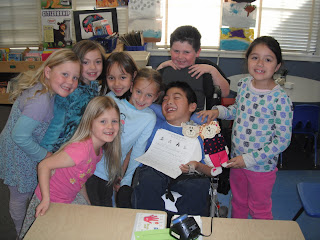 This feeling of belonging was never so evident than with Aidan's recent hospitalizations (yes, that is plural; he had two major hospitalizations in two and a half months). It was a very tough time for our entire family and came completely out of the blue.
The first hospitalization started with a fever, after school one day, and it persisted and developed into a bad cough. He saw the pediatrician. She prescribed antibiotics and we thought he would get better soon. After 2 days, while I was bathing Aidan, I noticed that the site of his baclofen pump appeared unusually puffy and that there was a red patch leading from the pump site to the lumbar region that felt hot to the touch. That made alarms go off in my head. The next day, I took him into the pediatrician's office for an urgent visit and she told us that she feared that his baclofen pump might be infected. She told us to go to UCLA ER. When we got there they started IV antibiotics right away. They took a sample of the fluid from the puffiness and because he had been coughing badly and still feverish, they also swabbed his nose to test for RSV. 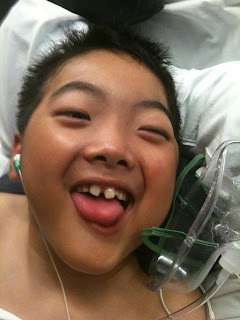 While I could go on and on about spending 3 sleepless nights waiting for a hospital bed in the overflowing ER at UCLA, and about our harrowing hospital experience,.. I won't. To make a long story short, Aidan's intrathecal baclofen pump turned out to be infected by staph bacteria. He had to have surgery to remove the pump and get treated with IV antibiotics to completely clear the infection. And if that wasn't bad enough, Aidan also had RSV pneumonia. This definitely complicated his recovery. He spent 2 weeks at UCLA recovering from the surgery and infection. Then he spent about 5 weeks at home feeling miserably uncomfortable. His body was super super stiff and he was completely, a prisoner to his body. To compensate for the absence of the medication he was receiving intrathecally, the doctors had put Aidan on high doses of 3 different medications given by the g-tube, to help relax his extremely contracted body. To put it in perspective, the doctor said that if any one of us were to take just one dose of his medication, we would be asleep for a week! But, since Aidan had been on the medication for so long, his body had gotten used to it and metabolized it really quickly. Also, the delivery method of the medications via g-tube was just not nearly as effective as getting it intrathecally.
So...this extremely difficult time at home led to the second hospitalization, which was also a little unexpected. Aidan's dystonia was getting so bad that it had started to impact his breathing. He would get laryngeal spasms which would cause him to lock his jaw open and his tongue would block his airway making breathing difficult. Because of this, we were urged by our doctors to get Aidan admitted to the hospital so that he could be monitored and be under medical supervision while they worked on getting approval to urgently, re-implant a new intrathecal baclofen pump for him. The surgery got approved and it got done in a few days and it was an amazing transformation! You could immediately see post-surgery, that he was so much more relaxed and comfortable. Hallelujah! We were all so happy and relieved to see Aidan more comfortable and able to smile again. 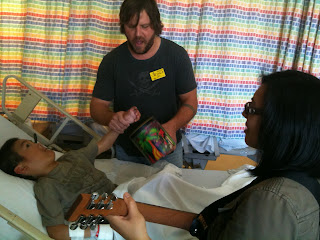 As one would expect, Aidan's illnesses and hospitalizations caused a lot of stress and trauma to our family. Night after night, around the clock someone would be at Aidan's bedside. And this could not have been possible without the remarkable support of my wonderful husband, who could have easily used the excuse of having to work and run his new law firm. He and I basically did a tag team duty at Aidan's bedside. Several people offered to come by and give us some respite, but when Aidan's condition was very acute and worrisome, I felt it was imperative for either me or Kevin to be there to help guide Aidan's medical care.
When Aidan was initially hospitalized, several of Connor's classmates' moms were concerned and offered to help. One sympathetic mom even organized a meal sign up with the class parents to prepare meals for us and delivered them to our house. Many offered to pickup Connor and take him for playdates so that I wouldn't have to worry about him. It was such an outpour of concern and genuine hospitality that completely touched by heart. Most of them did not even know Aidan directly. I was just so amazed at how much these people were willing to help. And people's concern and kindness was widespread. The school's maintenance lady, who always sweetly greets and talks to Aidan, even made him a quilt. People were so thoughtful and caring.
After a 3 month absence, Aidan returned to school. His classmates were so happy to see him and have him back in the classroom. When I walked him into the classroom the first morning back, we were swarmed by all the kids cheering, "Aidan's back!" A couple of the girls said they had dreams about him and many of them gave him lots of hugs. This show of affection and caring by our community made me truly feel...we belong now.
Posted by Aidan's Mom at 12:52 AM