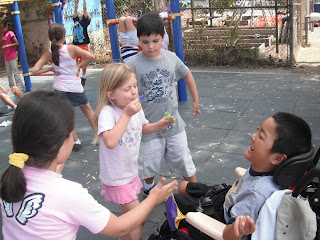 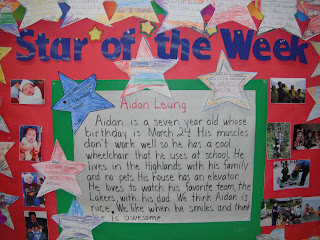 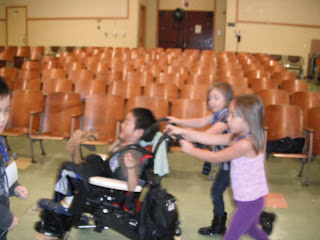 "Aidan is a seven year old whose birthday is March 24. His muscles don't work well so he has a cool wheelchair that he uses at school. He lives in the Highlands with his family and no pets. His house has an elevator. He loves to watch his favorite team, the Lakers with his Dad. We think Aidan is nice. We like when he smiles and think he is awesome."
Aidan was the first "Star of the Week" of his first grade class. That was the "story" that the kids in class wrote about him after interviewing him. The parent's task was to provide photos of the child at different stages so that the child can tell the class about them and so the class can learn more about the "Star Student." I provided the photos and helped Aidan describe them by recording the narration on his Step-by-Step switch. Ms. T helped Aidan answer the interview questions from the kids. Aidan's teacher, Mrs. L, was good about guiding the children to direct the questions to Aidan, rather than asking questions about him in the third person like he wasn't there. When the kids would ask, "Does he have a brother or sister?" Mrs. L would correct them to ask Aidan, "Do you have a brother or sister?" I thought this was a very thoughtful, sensitive and inclusive gesture by her.
So far, Aidan's first grade teacher has been great...even better than the kinder teachers. Mrs. L is a little older and has taught at the school for a long time, and even though entirely new to this level of special needs inclusiveness; she has been doing a wonderful job. She seems genuinely interested in including him as part of the class, and genuinely interested in educating him and getting to understand his world. We were in Aidan's Inclusion Team Meeting together and she pleasantly surprised me by saying how cool she thought him being in the gait trainer and stander was. I thought she might be annoyed with the space the equipment took up in the class full of 27 kids (every year she's had to deal with the increasing class size due to the budget cuts). But, she also expressed interest in learning about Aidan's Dynavox (his talking computer) and wanted to take an overview class on it. Mrs. L brought up Aidan's class test scores (8/10 and 10/10). She was very impressed, as was I! The inclusion facilitator, Miss L had adapted the test and ran Aidan thru it and he did amazing! I was so impressed and proud! As his mom, I'm a little biased, but I know Aidan is sharp, because I can tell he is so aware of what is going on and follows along and has a great sense of humor, but when outsiders can prove to me that he has academic smarts too, I am just gushing with pride!
Miss L has told me that the children in the class are also amazing with Aidan and have been really good about including him and helping him and enjoying having him be part of the class. When I am around the school and see Aidan and Ms. T, there is usually a cluster of girls around them, fighting to help and push his chair. It's definitely nice too, that Aidan has about 5-6 friends from his kindergarten class that are also in his first grade class. It's also been great too, because Aidan has been invited to several birthday parties now. I think my having Aidan's birthday party did help to break the ice a bit with the other kids and their parents. I took Aidan to a classmate's birthday party and he ended up being the only (non-relative) boy there! The father of the birthday girl told me that she only invited girls and she specifically wanted to invite only one boy...my Aidan?! Aaaww! So sweet! Another example of the sweet kids is this...Aidan was out sick for about 3 days about the third week of school, and when I walked Aidan in to class when he returned the first morning, one of his classmates said, "Aidan you're back! We missed you!" Wow! What good kids, huh?! I was so touched!
It's interesting now that both Aidan and Connor are at the same school. Connor is now attending the Pre-K class at Aidan's school. And sometimes they're classes will pass each other in the halls or courtyard, and apparently, as reported to me by Ms. T, Connor will point out to his classmates and say, "That's my brother, Aidan! Hi Aidan!" and he'll run over and give Aidan a kiss. I am pleased and relieved that Connor maintains a sense of pride when he sees his brother even around his own friends. In the back of my mind, I was a little concerned that he might be a little embarrassed or afraid to speak up about his brother. But, when it comes to Aidan, Connor continues to surprise and please me and... make me proud.
Posted by Aidan's Mom at 10:12 PM