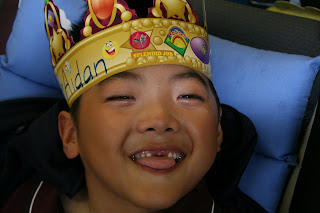 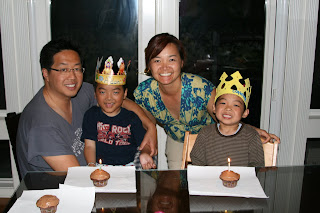 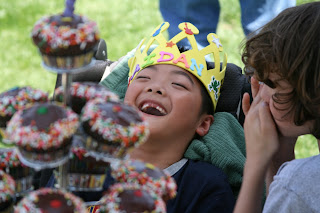 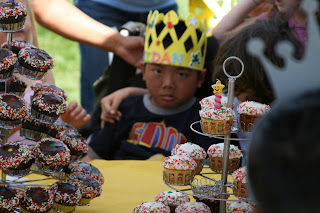 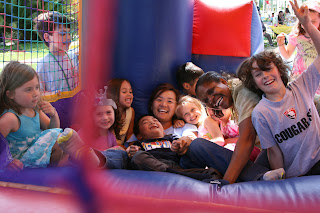 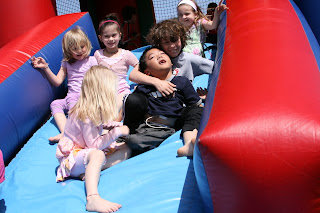 Despite being a little on the windy side, I couldn't have asked for a better day for Aidan's birthday party. It was sunny and beautiful. The party site, our HOA's clubhouse playground, was perfect too. They've got a big playground with structures, slides, sandbox, and swings and a huge grassy area with picnic tables. I also rented a jumper and hired a glitter tattoo artist- something novel and cool, that the kids ooh and aah about. And for some reason I decided to bake my own cupcakes...about 50 of them, frosted and decorated myself. I stayed up til 1am the night before finishing them off. Secretly, I harbour a certain sense of pride and satisfaction in saying, "I made them!"
Out of the 20 classmates and 2-3 kids from the kinder class next door that were invited, about 80% of the kids showed up!? It was an amazing turnout! And while I did state on the invitation "No Gifts," many still felt compelled to bring something. However, the gifts that were brought were all very appropriate for Aidan to enjoy. Some gifts were balloons, home-made cards, books, DVDs, and flowers. It was truly sweet to see each of the kids arrive and greet and give their birthday wishes and gifts to Aidan.
The glitter tattoo artist was a hit. Every kid at the party got a glitter tattoo of their choice. And all of them seemed to proudly show off their tattoos. The jumper was also a huge hit. I had no idea that these giant inflatable bouncers could provide such immeasurable, tireless entertainment for children?! I've witnessed my own Connor find pure adrenaline-filled joy jumping and sliding and climbing repeatedly over and over and over. If allowed, I think these kids could just spend hours on-end in and out of the jumper. I also put out some foam crowns and tiaras for the kids to decorate. It was quite funny when a few of the boys decorated tiaras for themselves. But at that young age...who cares, right? I don't think the boys even knew the difference. Later, I gathered everyone together for the cupcakes and song. I told the kids, "Let's sing Happy Birthday to Aidan like you did in class!" And in complete unison, all the kids started singing...Aidan's least favorite song..."Happy Birthday to you...Cha-Cha-Cha!" I was so glad to see the kids so gleefully singing to my Aidan, while simultaneously worried that Aidan would start tearfully bawling at this happy occasion. Since Aidan was young, he never liked the "Happy Birthday" song. When we'd be in restaurants and the table next to our's would sing Happy Birthday, he would cringe and tense up and the pouty lower lip would come out and when the song was over, he would start bawling. The song, coupled with the loud cheering and clapping afterwards, just triggers an unhappy, terrified reaction in him. But, luckily at the party, one of his older buddy friends rapped and told jokes in his ear to distract him from the song. Aidan usually does not like to be center of attention, which is the complete opposite of Connor. But, Aidan did quite well on his special day.
After the cupcakes, I got Aidan into the jumper. While I was nearly sinking in the jumper, trying to shield Aidan from all the jumping, romping kids, they all started to chant, "AI-DAN, AI-DAN, AI-DAN!" It was very cute and amusing. Aidan got a kick out of it.
Overall, the party turned out really, really great. I am so glad that I had the party for Aidan. There have been so few occasions in his young life where he has been center of attention for a positive, joyous reason. I'm glad he got that experience. He truly enjoyed himself and loved celebrating his birthday with everyone. Aidan was so happy that when the party was over and the kids started to leave and say Goodbye to him, he got very sad. He's an extremely sensitive, wear-your-heart-on-your-sleeve kind of guy.
I learned several things from having this birthday party for Aidan; 1) His classmates are really appreciating, accepting and liking who Aidan is; 2) If a parent chooses to drop-off their child at your party, they must designate another parent to monitor their child, and also get the parent to leave a cell phone number. One parent decided to leave her child unmonitored at the party and also showed up late to pick him up! And...her child was not the type that should be left unmonitored. Why would any responsible parent drop-off their 6 year old child at a stranger's party at a big, open, uncontrolled playground?!
3) I'm going to have to be the one to break the ice with some of these parents. Some of them seem very nice, but I think they just don't know what to say to me. Maybe because I am a parent of a special needs child, they feel like they would have nothing in common with me? Granted, as the party host, I didn't spend much time chatting with anybody. Nonetheless, I am determined to break the ice...one of these days.
Posted by Aidan's Mom at 11:33 PM