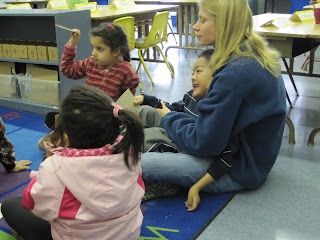 Returning from the winter break, Ms. T told me she had to take that first week off to stay home to care for an ill family member. She told me that the district would send a licensed vocational nurse to be with Aidan at school, but I declined it and chose to accompany Aidan to school myself.
It actually turned out really good for me to spend those days with Aidan at school because, I got to talk to his therapists and see what it is they work on. It was also good for me because I got to see Mrs. B and Mrs. S teaching on their respective days. From what I saw, it seems like the teachers are getting into the groove of including Aidan and treating him as one of the kids. When Mrs. S reviewed the sight words with the class and called on students one-by-one, she even paused and asked me about Aidan and his computer. Miss L, the Inclusion Facilitator, had input all the sight words on his Dynavox, and on those types of activities, Aidan uses the Dynavox to participate. Unfortunately, I had forgotten to bring his Dynavox to school that day. Ugh!
I also got to see Miss L in action too. I can't say enough good things about her! She worked with us during Science. I followed her lead. Since the science teacher had the kids stay on the rug in little groups, Miss L took Aidan out of his wheelchair and sat with him on the rug with the kids. The science teacher talked to the kids about paper and had them touch and feel different types of paper - tissue, corrugate, cardboard, etc. Miss L sat with Aidan in her lap on the floor and helped Aidan to touch and feel each of the papers. It was so pleasing to see! Aidan was attentive and engaged. While they were in Science, I had to step away for 15 minutes, and when I got back, Miss L had Aidan in his gait trainer out with the kids at recess. I was so impressed! Apparently, she feels comfortable managing him with transfers and handling his body. Not many people do. And because Miss L is not a therapist, and surely, Aidan is more physically involved than the other children she's worked with, it's even more impressive. Her presence has truly made a world of difference for Aidan's school experience. I'm going to have to say, "I heart my Inclusion Facilitator!"
Interesting because Mrs. S told me that Aidan is like "Charlie" of Charlie's Angels. Apparently, he has a few kids that are his "angels" - his helper buddies. So when they do table time activities Mrs. S seats Aidan with his "angels." I think that is very sweet and thoughtful of her to do so.
Because it was the second week of January, and the Martin Luther King Holiday was coming up, Mrs. S read a book about MLK to the class and taught the children a little bit about MLK and how he was famous because he fought hard to end segregation of Whites and Blacks. Mrs. S asked the class and gave parallels if they could imagine a world where people were separated by the color of their skin. She gave examples of how people should accept differences. In my mind, I thought this was a great opportunity for her to use Aidan as an example for them accepting him even though he's different. But, I realized that Mrs. S was probably more wise not to single him out publicly. It was probably more politically correct to not mention it.
So Mrs. S created a class activity inspired by MLK's "I have a dream..." speech. She gave the kids paper clouds and directed the class to think about a dream that they have about the future and draw it out on their cloud. Though, she caveated that the dream could not be superficial and about material goods, like... wishing for a new Transformer toy, etc. She wanted the children to think about their own dream of something that would help people. Kids raised their hands with examples that their dream was: "... to not fight with their sibling any more," or "to clean up their room," or "to recycle more." When we got to the tables to do the activity, the kids were quietly doing their drawings on their cloud. I talked about it with Aidan and since it was going to be difficult to do it hand-over-hand with him, I started to draw it out for him. Although, I felt a little inadequate because my drawing skills are so poor. One of his "angels" asked me, "What's Aidan's dream?" I told her that Aidan's dream is that one day he will be able to run around and play his brother and his friends. She smiled and said, "That's a good dream."
It was strange though because when I showed Aidan the drawing and described it to him, he seemed to get a little sad. A little sad, upturned lower lip came over his face. I wondered if perhaps, it made him sad to think of not being able to do such things? Maybe he wishes it to be so much that it makes him sad that he can't? I can't know for sure, but I think that may explain some of his reaction. Aidan frequently amazes me at how much he does know. Sometimes its difficult to tell, but he is usually quite expressive with his emotions.
Posted by Aidan's Mom at 11:55 PM