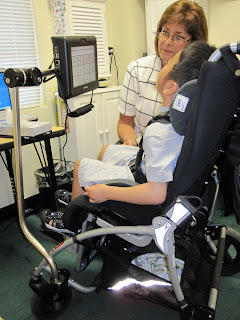 We saw Ms. C, Aidan’s Augmentative Communication Specialist, and we tried the new Impulse Switch. This switch is a brand new, cutting edge device that uses wireless Bluetooth technology similar in function and size to a Bluetooth for your mobile phone. It has sensor pads on the underside which can be affixed to a specific muscle and sense its movement. For Aidan, since his smile is his best, most reliable form of communication, we were trying the Impulse Switch on his cheek muscle. It’s supposed to work with the Dynavox, a dynamic communication system with visual and auditory outputs. When the device visually and auditorily scans through his choices, Aidan would make a selection by smiling, and thus the Impulse Switch would trigger the device and make the selection for him. That’s the idea any way…But, Aidan was having a particularly bad day with his body, posturing a lot and grimacing and orally groping. So the switch was not going to be that helpful. Morever, Ms. C tried exhaustively to get the Impulse Switch to work with the Dynavox and it just would not. Definitely not a plug-n-play device. Apparently, the Impulse Switch works well with a laptop and appropriate software. But, that would have to be something that I would have to purchase. But, given Aidan’s difficulties with his body, we decided at this point in time to abandon the idea of the Impulse Switch. Because the switch costs nearly $2000, Ms. C convinced the company to loan it to her for a 2 week trial period for Aidan. The point of access to communication has always been the biggest challenge with Aidan. We’ve tried for him using his right foot to kick a string switch, but that movement ends up being a little taxing for his body some times. He might get excited and kick to make his selection but then he can’t relax his body enough to release the kick appropriately. So, with all these unresolved issues, we decided to simplify the use of the Dynavox and just make it very basic where Ms. T would read out his choices on the screen and based on Aidan's smile make the selection for him. Our priority was to just get the Dynavox into the classroom with Aidan so that he could get used to using it and get the kids and teachers more comfortable seeing him with it.

And...apparently the Dynavox (the kids call it, Aidan's Talking Computer) has been a big hit in the classroom! The kids love it! And everyone seems to gather around him whenever he has it. Ms. T is getting comfortable with it and Miss L, the Inclusion Facilitator, is starting to work with it and adapt class lessons and input programs into it. It'll be a learning process as to how to incorporate it as his communication device as an included member of the class.